Ringing Long Island are a handful of much smaller islands with their own distinct communities. To many people, places like Long Beach and Island Park are simply part of Long Island, but residents who call these smaller islands home treasure their detachment from the mainland.  Though young adults often must leave to seek employment opportunities, an island mindset, once instilled, is hard to shake.

A female sea turtle will traverse an entire ocean to nest on the beach on which she was born.  A similar nesting urge pulled Lora Lomuscio to Shelter Island, to raise her family on the island of her upbringing.

Sandwiched between Long Island’s north and south forks, Shelter Island is actually its own town, and on November 8, 2016, its residents joined with voters on the mainland to show that the vast majority of Long Islanders value protecting the waters that surround us all.  Shelter Island joined ranks with the towns of Riverhead, Southold, Southampton, and East Hampton to support amendments to the Community Preservation Fund.  The fund is anticipated to raise over 2 billion dollars for land and water protection over the next 30 years.  Across the five towns, 78% of voters supported the ballot measure, dispelling any notion that the presidential election result was a statement about people’s attitudes toward environmental protection.  The CPF vote was just more evidence that regardless of the scale, we are all truly islanders. 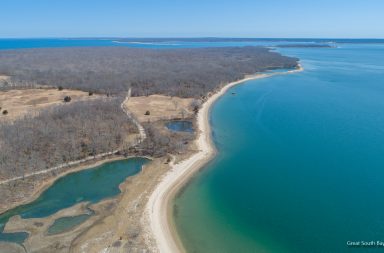