Reports are coming in about two suspected Shark attacks shortly before noon today, one off Sailors Haven and one off Atlantique.

Rick Zappia, President of the Bay Shore Tuna Club,  spoke with Islip Town officials who confirmed that a 13-year-old boy was transported to Southside Hospital with non life threatening injuries.  Rick suspects it was a Sand Tiger Shark that sometimes feed very close to shore on Fire Island.  They are not considered man-eaters but do have sharp jagged teeth and grow as long as 12 feet in length.

NBC reported that the boy was boogie boarding and stumbled out of the water bleeding.  The wound was dressed and cleaned on scene.  First responders also found a tooth lodged in the child’s leg.  The tooth was removed and is being analyzed to confirm the shark species.

Islip Town and the Fire Island National Seashore have closed all Ocean facing beaches to swimming until further notice.

We are trying to find more details about the other attack at Sailors Haven, about 5 miles to the east and managed by the Fire Island National Seashore in the Town of Brookhaven.

Early reports indicate that the other victim is a 12-year-old girl.

For a live look from Davis Park click the links below.  The beach appears to be open with people in the water as of 1:30 p.m. 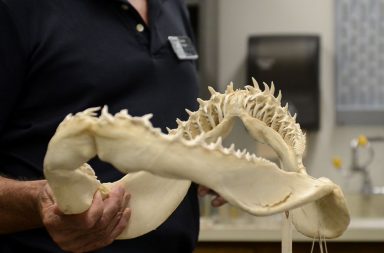