Determined for this to succeed, knowing that if it again failed it would be at least another decade before we could reconsider, I felt a deep obligation to make sure that this played out differently than the failed crusade that I had championed over a decade earlier.

For this to play out differently this time, several things needed to fall into place.  First, we needed to eliminate the archaic loophole that allowed for directed terrapin harvest in NY.  For this to happen DEC’s Bureau of Wildlife would need to hear strong unequivocal advice from herpetology experts.  This is where one of New York’s leading herpetologists came in.  Dr. Russell Burke of Hofstra University reached out and got over 60 reptile experts to sign a letter to NYS DEC saying “It’s time to stop catching and selling this species” a practice already outlawed in other coastal states.

Next, we needed an open and honest dialog with crabbers.  So, I offered to set up a meeting with commercial crabbers, Dr. Burke, DEC officials, and Long Island naturalists John Turner and Mike Bottini.  Although it was at times tense and awkward, we ate bagels, drank coffee, and listened to each other’s concerns.  While some crabbers obstinately denied ever seeing or catching terrapins, others were more forthcoming, admitting they caught them and expressing remorse about unintentionally drowning them.  Some did not like the style of excluders used in other states, they said they didn’t fit in their traps.  Several were fiercely adamant that if excluders were required everywhere in NY it would negatively impact them financially by reducing an economically important by-catch, conch (AKA whelk/scungilli).  We took out maps and markers and fishermen and scientist discussed what areas were prime terrapin habitat, where they trapped most.  In the end, a begrudged tentative agreement was made that neither the naturalists nor the crabbers were totally happy with, but which, if moved forward, would require excluders in much of the ideal terrapin habitats (creeks and harbors) without impacting traps fished in the open bays where terrapins are encountered less, and where the majority of traps are fished.  The plan would, after so many years, finally require excluders in Stony Brook Harbor and other Long Island Sound embayments in NY where blue crabs were historically less common but are now increasing as waters warm and species ranges shift.

Another important piece was finding a style of excluder that was acceptable to crabbers, and then finding a way to offset the cost to crabbers.  Fortunately, one of the crabbers I knew from my shellfish restoration work in Great South Bay was willing to test several different design options and report back.  Ultimately, after a year of testing, he selected a style that he’d shown not only kept terrapins out, but also increased his catch of blue crabs.  My organization, The Nature Conservancy, committed to fund the purchase of the metal excluder design that came out of this process.  We contracted with a US manufacturer in who made them with US stainless steel.  We even got help from a friend at Freeport Auto Parts and a local Boy Scout Troop to clean and tumble the sharp edges off them.  And we produced a video featuring a Brookhaven crabber showing other crabbers how to install them, and where to get them for free.  Our friends at Seatuck Environmental Association chipped in and purchased of thousands of the plastic style excluders used by fishermen in neighboring states.  Both styles are being distributed to crabbers for free by NYS DEC.

Another important piece of this story was getting people to submit comments to NYS DEC during the public comment periods for both the directed harvest provision, and the terrapin excluder provision.  This is where many of the people who are reading this article in Fire Island and Beyond contributed and as a result DEC received over 1600 comments in support of the proposed terrapin excluder rule, with only 4 in opposition.  And finally, there was persistence.  It’s been four years since that fateful discussion at the Marine Resources Advisory Council, and during that time it took dozens of calls, meetings, and emails at all levels of state government to keep things moving.

Thanks to all those that have contributed, 2018 will be the first year there is no directed harvest of diamondback terrapins allowed anywhere in NYS, and the first year that terrapin excluders will be required in crab traps fished in prime terrapin habitats in NYS.  In addition, some crabbers are already committed to using them for all their traps, even in places where they are not required to.  I think we should all celebrate this summer with a big crab boil.  My wife and I are already planning a trip to kayak our old spots to look for turtles. 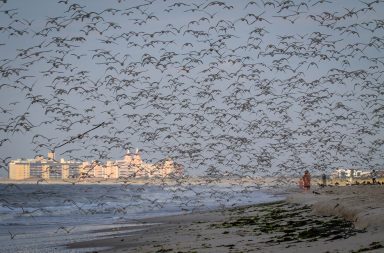