The announcement yesterday that Late Night Ferries and Water Taxi Service would be curtailed for Ocean Beach and Ocean Bay Park will probably solve some problems with drunk and rowdy behavior, but it also may have some unintended consequences for some residents and workers.

I reached out to an employee of Flynn’s in Ocean Bay Park to get his perspective and a few quotes but decided to just offer his complete and balanced thoughts below.  He chose to remain anonymous knowing emotions are running on high on both sides.

It is too early to tell what the results of the decision to eliminate the 1:00 a.m. ferry will be for the community of Ocean Beach or for Fire Island in general. The truth is, Ocean Bay Park has not had a 1:00 a.m. ferry for several years except for holiday weekends, and even on those weekends those boats are not heavily used from this community. Flynn’s is more of a happy hour type place and our entertainment tends to begin much earlier than other venues and because of that we tend to close earlier as well, our nights are generally over by 11:00 p.m. or Midnight.

The community of Ocean Beach is a different story. The bars go late, and people come over with the plan to party till the last boat then head home.  If the last boat is at 11:00 pm people might not make the decision to come over at all.  Also, that 1:00 am boat was not only a party boat, it was a commuter boat for employees of Ocean Beach. The cost of housing on Fire Island is very high in the summer months and if you work at an Ice Cream shop or as a bus boy in Ocean Beach, chances are, you are not renting a share in a beach house for several thousand dollars.  However, if your Ice Cream shop or your restaurant needs you to work until Midnight, now there will be no way for you to get home…

Again, these issues do not affect Flynn’s as much as Ocean Beach venues, but for Fire Island in general the more ferries that run, the better it is for the businesses over here. I am not privy to the events that led up to the decision to cancel the 1:00 a.m. boat, so it is hard to comment on if it was the best decision for the community of Ocean Beach or not, but I am certain there will be unforeseen consequences for all of Western Fire Island.  Through it all though, no matter what the ferry schedule is, Flynn’s will continue it’s 80 year legacy as a fun lively island bar with great entertainment, delicious food and beautiful water views; and we will continue to serve our patrons responsibly and have complete control over our premise, as we have always done in the past. We had no issues this past weekend at Flynn’s what so ever. There were zero fights, zero medical calls, zero 911’s.

Memorial Day weekend on Fire Island has always been a challenging time for residents and home owners. Having no one in the streets or on the beach for 7 months, people tend to forget what it’s like to have a community full of people. Especially because the people who come over to the beach on Memorial Day Weekend tend to be here to party. There is not a large allocation of police on Fire Island and so many people abuse the rules about drinking on the beach and on the streets. It’s a shame that some people’s poor behavior is jeopardizing the ability for everyone to come enjoy an evening on the beach, but we will see what happens. Hopefully, things will calm down a bit and the political powers that be will allow people to continue to come have fun and enjoy Fire Island.

Photos: A day trip to Ocean Beach and Ocean Bay Park via ferry 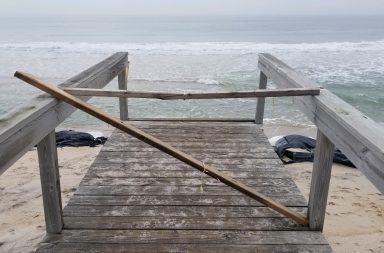