The Harvest Moon normally occurs in September but for the first time since 2009 rose in October this evening and won’t happen again until 2020.  The Harvest moon is the closest to the Autumn Equinox which occurred September 22nd.

One thing that makes the Harvest Moon unique is the shorter time between sunset and moonrise on successive nights.  The full moon always rises at the same time as sunset and then 50 minutes later each day.  However, around the Fall equinox that shrinks down to 30 to 35 minutes for several nights in a row.

This may have been important to farmers before tractor lights, allowing them to work late and not wait too long for the Moon to appear for some extra light.

With the overcast skies tonight I  wasn’t expecting much  but took a quick ride just after sunset to Bellport Dock just as it appeared on the eastern horizon.

With very little natural light the photo conditions were challenging to say the least but I gave it a try.

Photos and Video: Ice Stacks on the Great South Bay 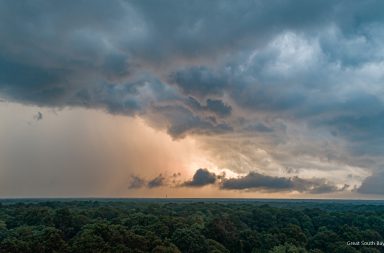 Photos and Video: Thunderstorm at Sunrise over Brookhaven and Bellport