About a month ago I was invited by Pilot John and my friend Fred Greco to take a Sunrise Helicopter ride over the South Shore.

We have featured Fred and his outstanding aerial images before here, here, and here.

I have flown and photographed from several different types of planes but this was my first Helicopter ride.

The aircraft is a state of the art Bell Jet Ranger with the back seat set up perfectly for photography with huge glass doors and small windows on either side to shoot without any obstruction.

Fred was kind enough to give up the prime back seat and chose to sit up front with John.  Certainly a great view but shooting through the canopy is tough.

Not only is the back seat better for photography, it felt more like sitting in the back of a luxury S.U.V.

Since it was my first flight, Pilot John asked if I had any preferences on where we should go.

Of course I suggested a ride heading South over the beach and then east over Fire Island.

I ended up with over 1000 photographs between two cameras so I will break this into several parts.

This will cover our departure from Republic Airport and proceed South over Amityville, crossing the Bay and passing Tobay, Cedar Beach, Gilgo, Cedar Beach and Democrat Point.

Amity Harbor and Beyond 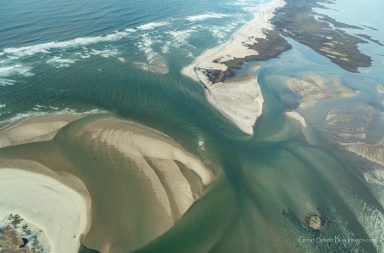