The last NYC Whale Watch for the American Princess Cruises with Gotham Whale ended on Sunday 12-04-16, what a season!

On Sunday we met up with a whale early in the trip and stayed with it for a very short while.

This whale acted different then most of the Humpbacks we see  migrating through the NYC/LI waters.

It would stay at the surface a little longer, splash more and take a few short breaths and disappear for between 6-8 minutes.

Upon closer observation the whale looked to have a rope behind its blow holes.

After a few more appearances for air,  we got some better shots of the rope and one really good fluke shot.

This was not a Humpback!

Captains Frank DeSantis and Tom Paladino backed off the whale and called me into the wheel house to look at the photos.

They have done this only once in 4 years so I think we all knew this was something big.

We noticed a few things that were different about this whale and needed confirmation.

We reported to the authorities that we have a whale in the western NY Bight that is entangled and might not be a Humpback Whale.

We send photos to the authorities and they get right back to us.

In the back of our minds, we suspect we could have a rare find as the Acoustic Buoy placed in the New York Bight has been detecting some rare Whale calls lately.

2. We have a whale that is entangled in a fishing net and rope.

It is wrapped from the snout, to around its jaw to a little back from the blow holes wrapping around its midsection.

The whale seems to be moving and breathing well, not sure if it was eating?

It looks to me from these photos that the whale has its jaws entangled shut but can’t 100% confirm this!

North American Right Whales are the rarest of all the large whales with stock estimates of only around 500 left.

Paul Sieswerda, the president of Gotham Whale, an organization that tracks marine life around NYC says this is the first documented North Atlantic Right Whale by Gotham Whale and American Princess Cruises since their inception in 2009.

WOW…We have the rarest whale on earth entangled in Fishing gear and rope just outside the busiest shipping port on the East Coast!

The authorities granted the American Princess permission to go back, approach and “stand-on” the whale but by now it had slipped away.

When we have an update on the whales condition we will let you know!

Photos and Video: Attempting to Herd a Humpback Whale Back to the Sea

A Day with Gotham Whale off New York City 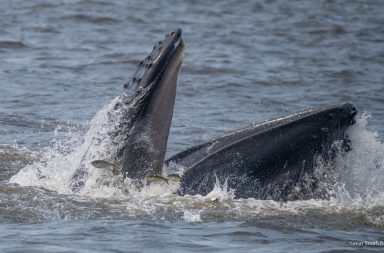