We are less than 24 hours away from a major winter storm and even now there is still considerable volatility in the model guidance.  This is where you have to look beyond what an individual model is showing but look at the big picture.

A low-pressure system developing to the east of Florida will rapidly lift towards the North Carolina coastal waters today and then towards the New Jersey/Long Island coastal waters tonight through tomorrow afternoon.  The track is expected to be just southeast of the classic benchmark track observed in region-wide heavy snowfall events.  Snowfall will develop after midnight and continue on through 6 PM tomorrow evening and then exit the region between 6 PM and 9 PM tomorrow evening.  Very strong winds are expected with this low-pressure system with sustained winds of 20 to 40 mph with gusts over 60 mph at times.  Poor visibility is expected at the height of the storm along with the potential for power outages.

YELLOW REGION:  This area will be right in the middle of the heaviest snowfall with the potential for mesoscale banding pushing totals over a foot of snow in these locations.  The strong winds and poor visibility will produce blizzard conditions at times.  There is a high threat for thunder-snow in this region.  Snow ratios of 12:1 expected.  The strong wind will have a limiting impact on snow ratios.

PURPLE REGION: This is a highly volatile region as this area will be under the strong influence of convective snowfall and potentially a deformation zone.  In this region, depending on where snow bands line up and how far they push into the coast.  As such, locations in this area could easily have a 10″ snow gradient from 4″ to 14″ depending on if a band of intense snowfall sits over a region.  As you remember in physics back in school, what goes up, must come down.  Therein lies the tricky part of the forecast as to where there is rapidly rising air, there will be rapid sinking air and thus an area of light or no snow for several hours in the storm.  There is a high threat for thunder-snow in this region.  Snow ratios of 12:1 expected.  The strong wind will have a limiting impact on snow ratios.

BLUE REGION:  This region is the second most volatile forecast, especially over northeastern New Jersey.  In this region, the snow shield is expected to be limited as a result of sinking air from all the rising air to the east.  Again, if this storm jogs west, snowfall totals will go up and significantly at that.  A difference of 5 to 10 miles west or east will have a major impact on the storm.  With that said, storms that feature intense mesoscale banding as seen on the NAM model guidance for example always has a sharp drop off in snowfall accumulation totals.  The question always comes down to where is that cut off.  As a result, went with a gradient of 2 to 4 inches, the further west you are, the lower the snowfall total towards 2″.  Snow ratios of 12:1 expected.  The strong wind will have a limiting impact on snow ratios.

LIGHT BLUE:  These areas are too far west for a significant snowfall, but given the cold temperatures, even a snow shower can quickly produce a dusting to an inch of snow in this event.  However, the bulk of the snowfall will remain east of these regions.

The high tide throughout the region will occur at the height of this winter storm.  The height tide alone would lead to moderate coastal flooding.  The caveat this time is all the ice found along the shore from the New Jersey coast to Long Island and Connecticut that will be pushed up into structures.  This may not only enhance coastal flooding into major levels in a few locations but has the potential to produce structural damage along the shoreline.

This is a complicated and dangerous winter storm, especially along the coast.  Any shift to the west or east will have a significant impact on snowfall accumulations.  However, I believe the forecast that is issued covers that risk as best as possible.

Follow Steve on Twitter for updates and check out our Weather Tab for updates with three cameras stationed on top of the Davis Park Casino showing live feeds of beach, marina, and surf.

Photos and Video: Sheets of Ice Pushing onto the Beach in Bellport

Photos and Video: Ice Stacks on the Great South Bay 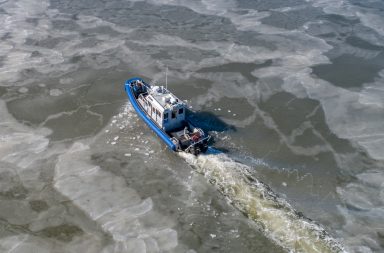 Photos and Video: Where Water Meets Ice on Bellport Bay