Fire Island and Beyond would like to welcome a new contributor, Theresa Macri.  Theresa lives year round in a small community near Ocean Beach and also volunteers at the Fire Island Lighthouse.

The FIMI Project is a one-time, stand-alone placement of sand to stabilize Fire Island until the larger FIMP project is implemented. Suffolk County and NYS Department of Environmental Conservation are the local sponsors of this US Army Corps of Engineer-designed and funded project.

The initial phases of the project were completed in 2015 and early 2016 and include Smith Point County Park, Robert Moses State Park, the Lighthouse Tract, and the communities of Kismet and Saltaire.

The 2016-2017 phase, which included the communities of Fair Harbor to Seaview, is slated to be completed over the next few weeks.  All the sand has been placed, and the crossovers in each of the communities are in the final phases of construction.  The last step will be to finish the dune grass plantings and add fencing.

One of the new challenges for this phase of the project is the piping plover.  The plover season is just beginning and now bird monitors are on the project every day to make sure that the plovers don’t find a nesting place in/near the construction area.  Let’s all hope that the plovers find another home for the season!

It is very exciting to watch the beach transformation and hopefully mother nature will be kind to our area for a few years to allow the dune grass to grow and flourish.  Looking forward to many relaxing days on the beach! 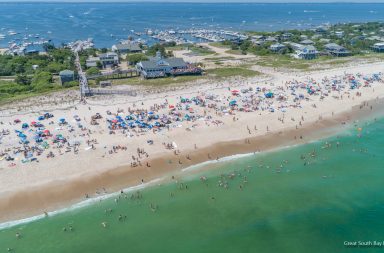