OK, so it may be either too cold or too hot for some of us to brave the elements and go outside to bird. However, if we feed the birds in our backyard, no matter how large or small an area, hours of great bird watching (and photography) are available to us. And one of our favorite, and most colorful backyard birds is the Blue Jay.

Take those peaceful times when the Juncos, House Sparrows, House Finch, Titmice & Chickadees are feeding, some on the ground and some at the feeders hung from a pole or on a deck, when a flash of blue flies in, lands, hops several times and cries with a loud “jay-jay-jay”.  All the smaller birds fly off and are replaced by Blue Jays on the ground and at the feeders.

Blue Jays have much more to them than most people are aware. We may think of them as the backyard feeder “bully”, but they can also be the early warning calls to alert for possible danger. They are also very territorial, and have been known to chase cats, dogs and even humans that get too near their nests and feeding areas. Jays are a  member of the crow family and have been observed using “tools” like crows do.  A group of jays may be known as a “band”, “cast”, “party”, and “scold” of jays.

Physically, this is a bird that is a bit bigger than a Robin but smaller than an American Crow. Visually striking, it is mostly blue on the back and grayish white on the chest. The birds have a black “bridle” across the throat, face and neck and some white spots on the tail and wings. Male & female jays look the same. Interestingly, Blue Jays aren’t really blue; the pigment in the feathers is actually a brownish shade and has everything to do with light and how it appears on the feathers. If you use infrared light in a dark room you will see the lack of blue.

Blue Jays flock together most of the time. During breeding season 3-10 males will focus on one female, bob their heads and use a “ toolo” call as courtship behavior. As time passes all but one male will drop out of the contest, leaving a nesting pair.

Nests are built-in either coniferous or deciduous trees about 10-25 feet above the ground. Both the male and female gather materials, but it is usually the male that does the most collecting of grass, rootlets, twigs, and mud. The female constructs the open cup which is sometimes lined with rootlets and mud.

Two to five eggs are laid and are incubated by the female for 17-18 days. Both parents feed the young a diet of insects and carrion. Jays are known to take eggs or nestlings from other species; however some research shows that this is not prevalent behavior.

Some people who feed the birds will clean up egg shells and put them out for the jays. I wasn’t sure about this, but I tried it and watched two jays fighting over the shells. There is some thought that the calcium from the egg shells helps the females create calcium for her own egg making. Another school of thought is that the egg shells provide grit to help grind up food in the digestive system.

Blue jays have a varied “vocabulary” and they are excellent mimics. They will frequently mimic Red-shouldered Hawks as well as Red-tailed Hawks. I must admit that while birding I have heard strange calls that I had never heard before and, sure enough, that strange call was being made by a Blue Jay.

Another interesting bit of history which is said to involve Blue Jays is their affinity for “caching” food, which is a means of storing food for future use, especially acorns.  Historically, in the 1800’s on Long Island, much of the forested area was chopped down for firewood and building supplies for New York City; Blue jays have been credited with helping to re-forest the Island by the act of this storing of acorns. Jays will also watch squirrels to see where they hide their nuts, and will then dig the nuts up and store them somewhere else.

With regard to Blue Jay migration, it is a bit of a mystery. Some birds in large flocks of adult and young birds do migrate. However, many birds do not migrate at all. Research shows that more than likely less than 20% of Blue Jays actually migrate. And those that do migrate may not go far, just a short distance further south.

Blue Jays can be seen just about anywhere on the Island. So listen for those calls and those large blue birds with that wonderful crest raised.

The Blue Jay; A fun bird!

The photos below were all contributed by members of the Long Island Wildlife Photography group on Facebook.

More Photos on Pages 2 and 3 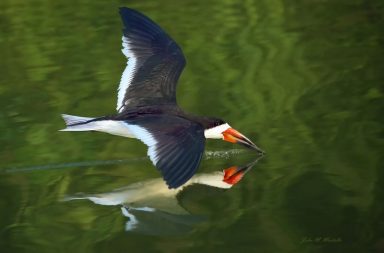 Best of Long Island Wildlife is Back!