Photos: November with a new Pair of L.I. Bald Eagles

According the New York State DEC,  years of indiscriminate killing and pesticides like DDT nearly wiped out the NY state bald eagle population with only one nest left by 1960.   A national ban on DDT in 1972,  laws against taking or killing bald eagles in 1973, and the initiation of New York’s Endangered Species Program in 1976 began a dramatic turnaround that continues today.   The turnaround wasn’t quick and New York established a Bald Eagle Restoration plan in 1976.  Biologists collected 198 nestling eaglets, most from Alaska, and got them to fledge from artificial nests with the hope they would return as adults to breed in New York.   This “hacking” worked -by 1989 New York State had 10 bald eagle pairs nesting successfully and the program ended.  The recovery continues today with the latest estimate of 170 pairs across the state, which is  probably low as there isn’t enough manpower to count them all.

If you don’t have the time or the eye to see these majestic birds for your self, I suggest joining the Long Island Wildlife Photography group on Facebook.  Although we discourage giving out specific locations, bald eagle sightings have gone from rare to common and members are sharing incredible shots just about every week now.   For an example, check out some of the images posted by members in this Bird of the Week article by Dianne Taggart.

Long Island was never known as a prime habitat but now appears to be catching up in earnest.  The first confirmed nest was spotted on the East End back in 2006 but as the Eagles appear to become more accustomed to urban areas it is becoming a much more common sight.

I have been watching a pair near my home in Brookhaven since 2012.  After a couple years of building the nest and attaining maturity they have been successful with one or two eaglets striking out on the own each season.     At last count there are at least 10 active nests spread across Long Island.  Since it takes about 5 years for an Eagle to reach sexual maturity, we could be on the verge of a population explosion similar to the recovery with the Osprey.

In late October I noticed a Bald Eagle soaring over the Long Island Expressway and followed him to a small lake at a fairly busy intersection.  Soon another Eagle landed next to the first with another soaring overhead.  I took a few shots and made a note to keep an eye on this spot.

I started making a habit out of swinging by this location on the way to work and just about every time I looked I saw both Eagles either perched in a pine tree or flying around the lake.  The tree looked to have some nesting material building up.  One afternoon I got to watch one circle the lake and land in the mud. 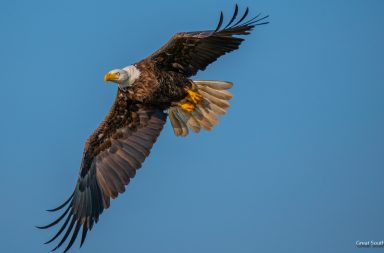 Photos: Bald Eagle Action on the Edge of the Bay

Photos: Bald Eagle and Osprey on the Great South Bay